Devices Huawei announced its 2016 hero smartphone, the P9, at an event in London today, placing photography at the heart of its proposition.“Consumers around the world use their smartphones to take billions of pictures each year, making photography critical to user experiences,” Richard Yu, CEO of Huawei’s consumer business group, said.The company made numerous references to its partnership with “premium, iconic” imaging brand Leica, an alliance announced at Mobile World Congress. It said the new device was “co-engineered” with the camera maker. 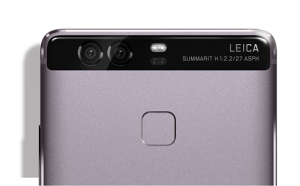 Oliver Kaltner, CEO of Leica, took to the stage at the event to discuss the partnership. “Our companies share the same vision when it comes to photography, and we both put a lot of effort into ensuring quality. Our process really starts with the identification of customer need, and then developing the best solution to meet it,” he said.The device features a dual camera set-up, with 12MP resolution. This is supported by two image sensors: one captures colour, while the other is monochrome, which is said to deliver better light sensitivity and detail, with Yu saying the combination delivers “more vivid colour and more detail”.And the low-light performance was also trumpted. “In normal light conditions, most smartphones can take a good photo. But in low light conditions, it’s quite difficult for the smartphone,” Yu observed.Other highlighted feature include three film modes, standard, vivid colours and smooth colours, which “faithfully renders the authentic colour and style of Leica”. A wide-aperture feature also enables users to adjust the aperture to create various effects, while keeping the main object in focus.Away from the camera, the P9 sees a number of updates over the earlier devices in the line, although none of other changes received anywhere near as much screen time. It features an improved finger print sensor, which it said is more than a match for those used by its rivals, and a “virtual triple antenna” designed to offer improved mobile and Wi-Fi connectivity.As usual, Huawei did not shy away from making comparisons with the smartphone flagships of its rivals – Samsung and Apple.It said the P9 offers a 5.2-inch screen in a comparable body to Apple’s 4.7-inch iPhone 6s, with 423 pixels per inch compared with 326 ppi for the Apple device.And it said the P9 is 0.99mm thinner than Samsung’s Galaxy S7 and 0.15mm thinner than iPhone 6s, while also not having a pronounced camera “bump”.P9 is powered by Huawei’s new Kirin 955 processor, an octacore chip (4×2.5GHz and 4×1.8GHz cores). It has a 3,000mAh battery, with Yu talking up the battery life of the device.It is powered by Android 6.0, coupled with the latest version of Huawei’s EMUI customisation.The standard, 5.2-inch full HD screen standard version is joined by a 5.5-inch full HD “P9 Plus” sibling. This device also sees a bump in battery capacity, to 3,400mAh.The P9 Plus also gains support for pressure sensitive touch input – it is not the first Huawei device to support this, but it has not been widely adopted across its portfolio, either.Four colours are available: rose gold, prestige gold, titanium grey and mystic silver, with a “deluxe” option available in haze gold and ceramic white. The P9 Plus is available in haze gold, quartz grey and ceramic white.Pricing starts from €599 for the version with 3GB of RAM and 32GB of storage, rising to €649 with 4GB of RAM and 64GB of storage.The P9 Plus version is €749 with 4GB of RAM and 64GB of storage.Availability begins on 16 April, in a number of global markets.TalkBand updateHuawei also unveiled an updated version of its TalkBand wearable, called TalkBand B3. 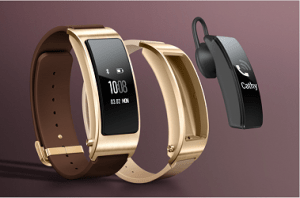 It said that while reflecting the designs of earlier versions, it also introduces “stylish new elements”. These include high-end materials, including “genuine Italian leather and high-grade stainless steel for the strap”.The curved touch screen also features an anti-fingerprint coating to protect against smudges and scratches.It is available in three versions: Active (white, black) at €169, Classic (beige, brown) at €199 and Elite (titanium grey) at €249. Steve Costello Xiaomi Q4 boosted by Huawei woes Author HuaweiLeicaP9